I’ve been using Google Ads extensively since 2006, and that’s why I decided that it was probably time to get my certifications. This post a review of my experience going through the Google Ads certification process.

I am fortunate enough to have been working closely with Google Ads for more than fifteen years, and in that time I’ve had the opportunity to get pretty deep into the platform. Even so, there’s always something new to learn, which is one of the reasons I decided to finally get Google Ads certified. This was my experience.

10 Things to Know About Ads Certification

Getting Started with Ads Certification

I like that the Google’s SkillShop learning platform gives you an estimate of how much time each module will take, thereby helping you set a realistic expectation of your time investment. Google estimates you’ll need about 2.5 hours for the coursework, and in actuality I needed about three (which I spread out over three days). 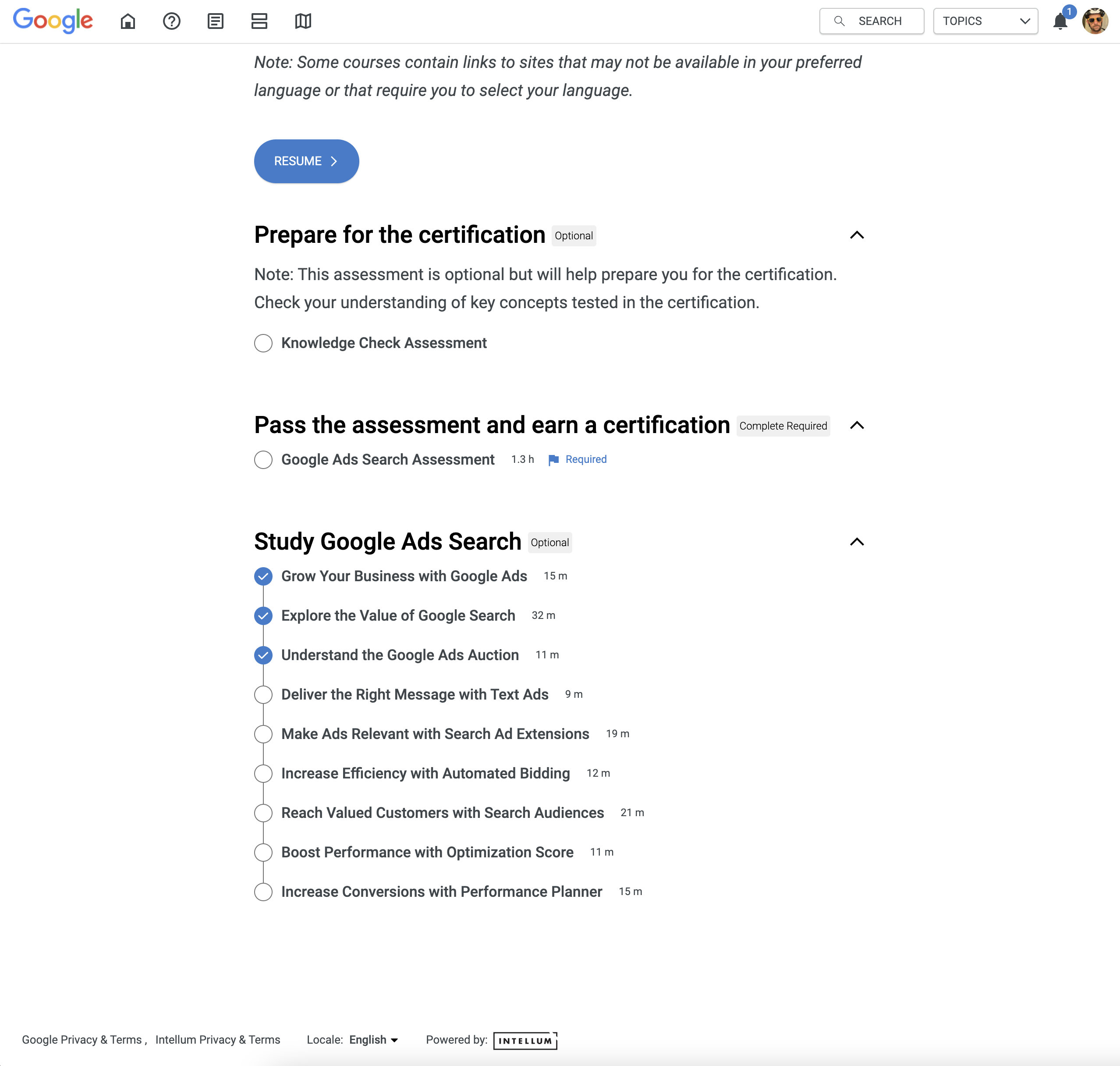 To add a little engagement there’s lots of little ‘check your knowledge’ sections, and different ways Google presents the information. These help make the content more interactive, rather than it just being straight text (like a boring old blog post). Even though they seem to be doing their best to dress things up, sometimes it feels like a bit of a (frustrating) test drive of their learning platform’s fancier features. What it can amount to is a lot of unnecessary clicking: 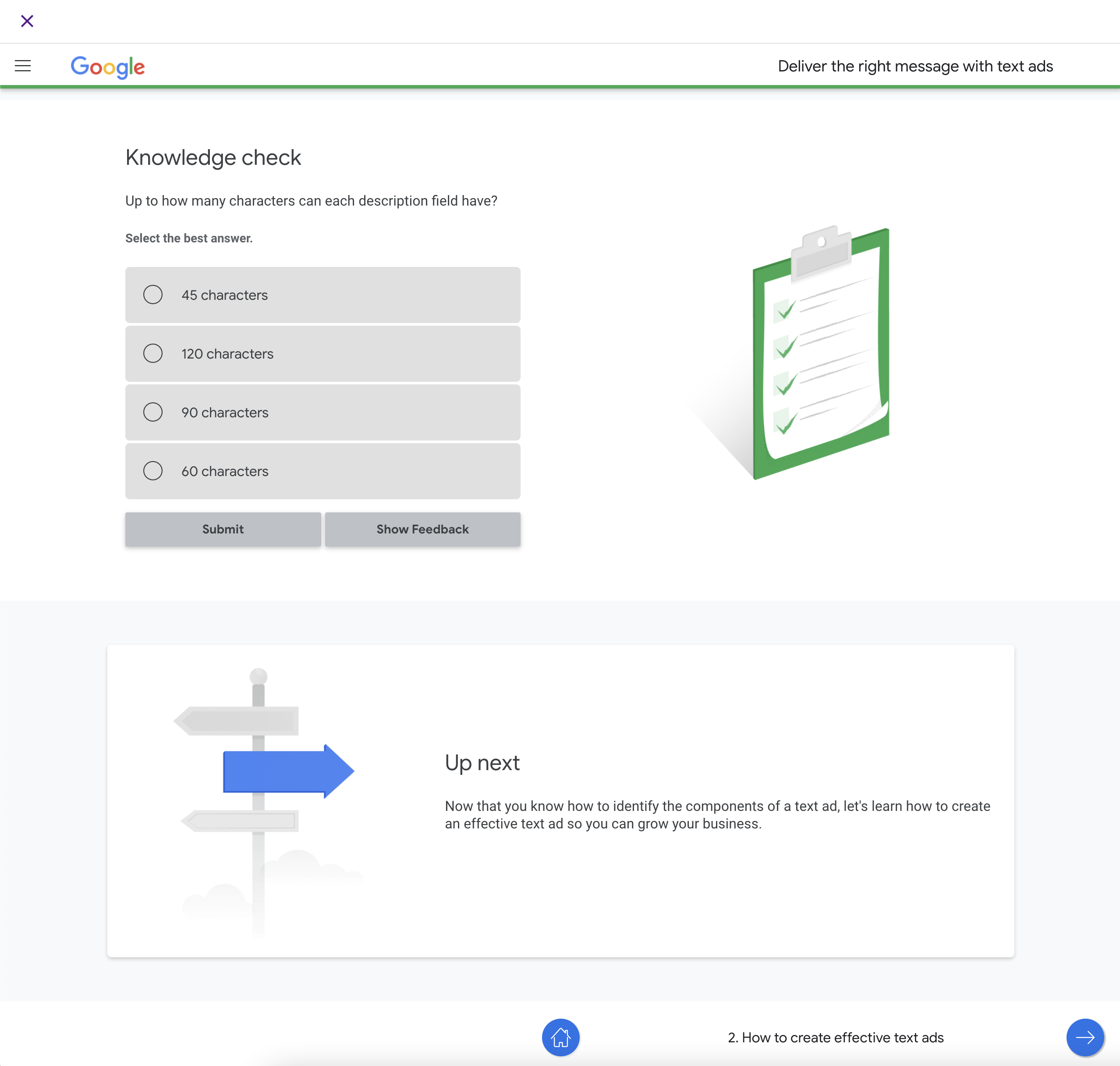 At the end of each course is a short assessment of 2-3 questions, thereby helping you gauge your understanding of key concepts. These aren’t counted towards a final score or anything, but instead they help you identify the most important ideas and where you might need to go back and invest additional learning time.

Because my mind tends to wander, I like to use VoiceOver technology while I scan the page which helps hold my focus. I guess I need to occupy as many senses as possible! If you’re built similarly perhaps you can try this yourself, and let me know if it was helpful (or not).

Beyond that, the other place I struggle is with multiple choice quizzes. I always have, and probably always will. In Google’s SkillShop these appear at the end of each course. In my opinion, the questions – not the answer options – on the quizzes could be more better written so that they’re clearer for the reader. It’s not all Google’s fault though, as my brain seems to try and see the correct answers in every option. 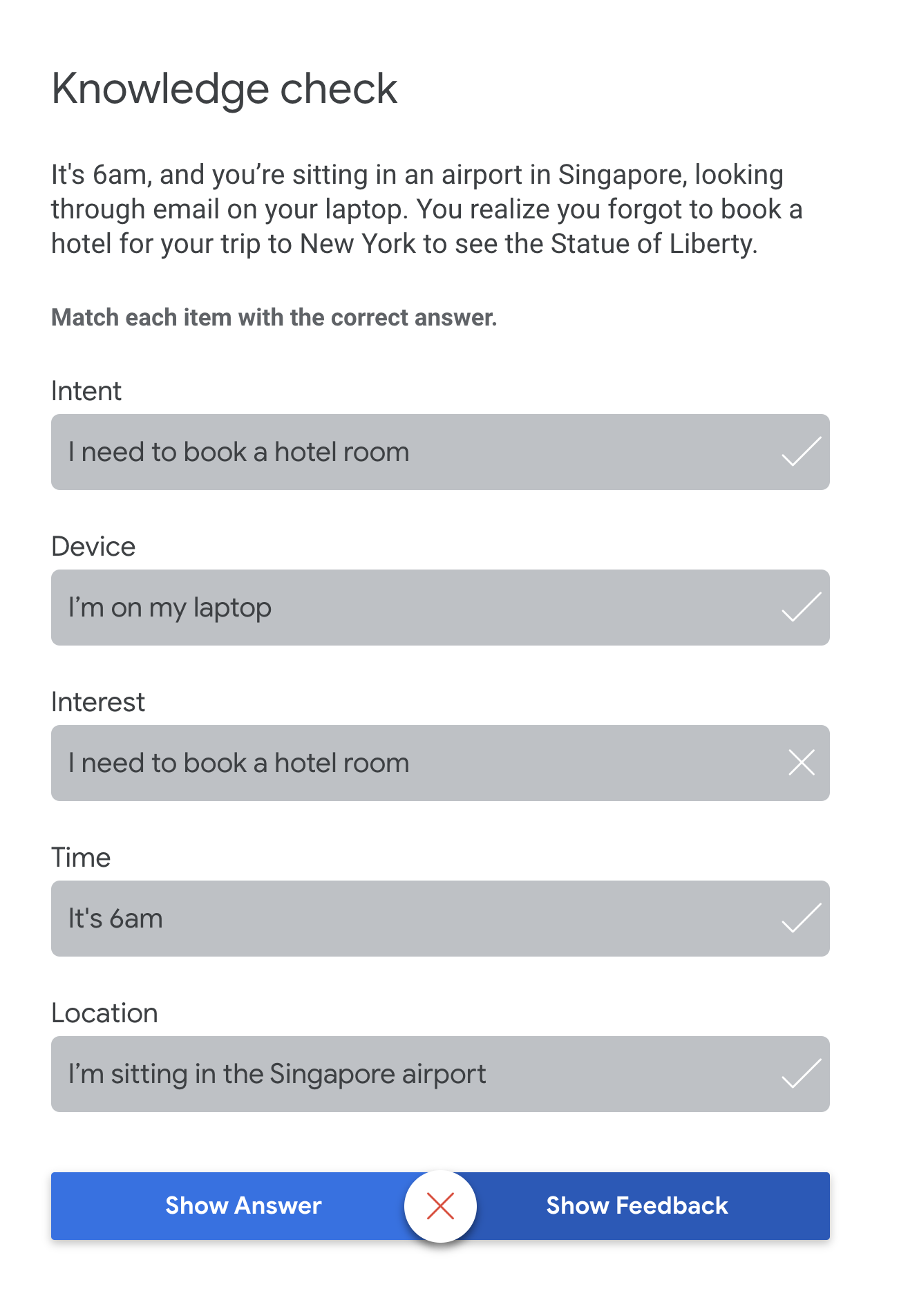 Here’s an example of what I mean. In the scenario above, Google insists my “interest” is New York and architecture. But it’s not. The scenario doesn’t say why I’m going to see the Statue of Liberty. Maybe I’m just meeting someone there to hand them a suitcase full of cash or something nefarious. No, my interest at the moment of sitting in the airport is the need to book a hotel room so I have a place to sleep.

By the fourth course or so you’re going to need to do some work in your Google Ads account, so you’ll want to make sure you have one set up. It was a bit confusing, but as I happened to be setting up a new Google Ads account I found that Google put me into “smart mode” instead of expert mode. The system also defaulted to ’Summary’ view instead of the more traditional detailed view: 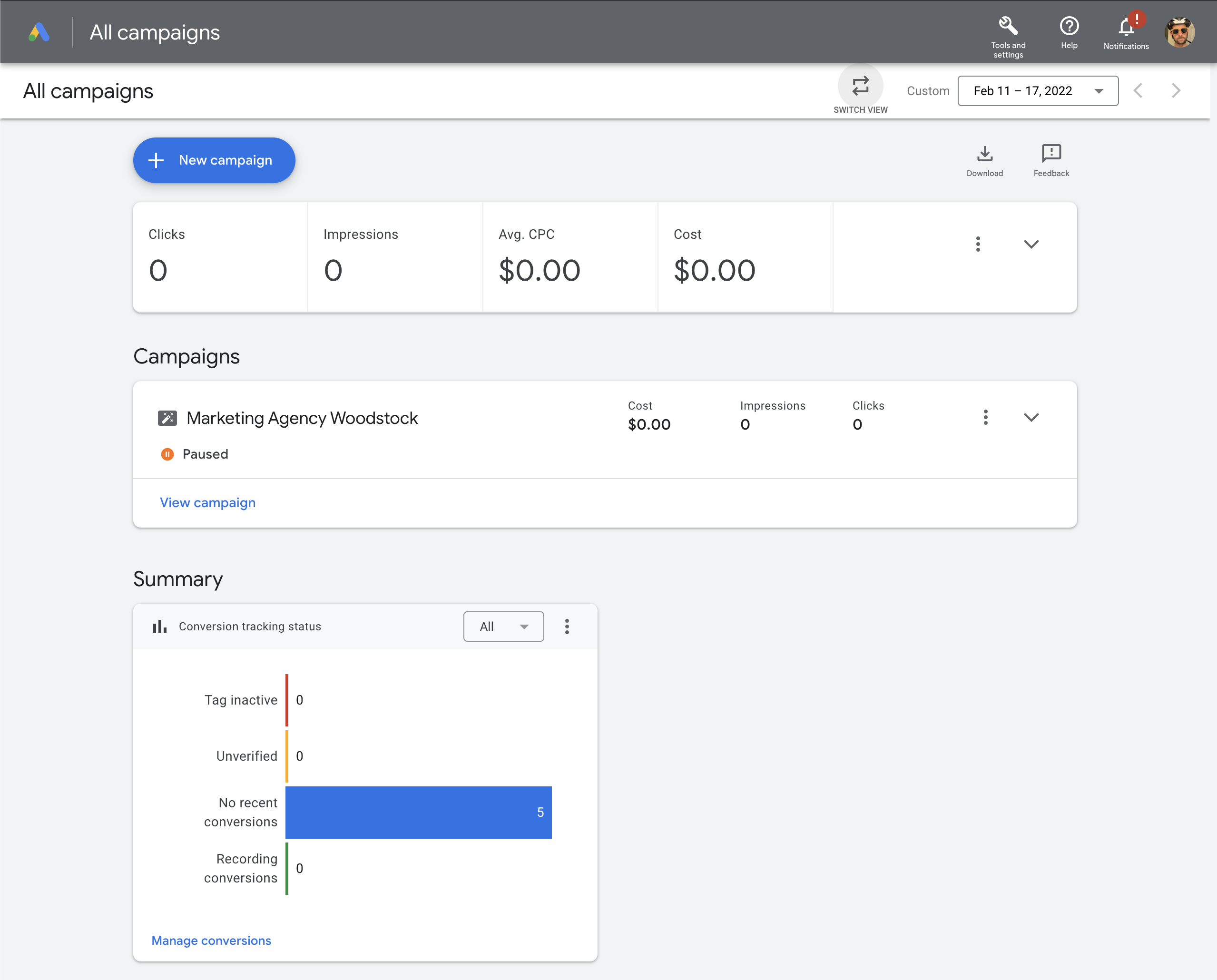 Too Many Typos, Google

I have to say, I’m surprised at how littered with typos and grammatical errors the coursework is. The marketer in me is getting some pretty bad signals about quality, and value, and it’s off-putting because Google is usually good about ensuring presentation is tip-top.

On a sidenote, this course has also been a reminder about how much data we unknowingly give Google about who we are and what we do. I’m sure that the uninitiated might take pause in seeing the following graphic which highlights the touch points where Google tracks something about you: 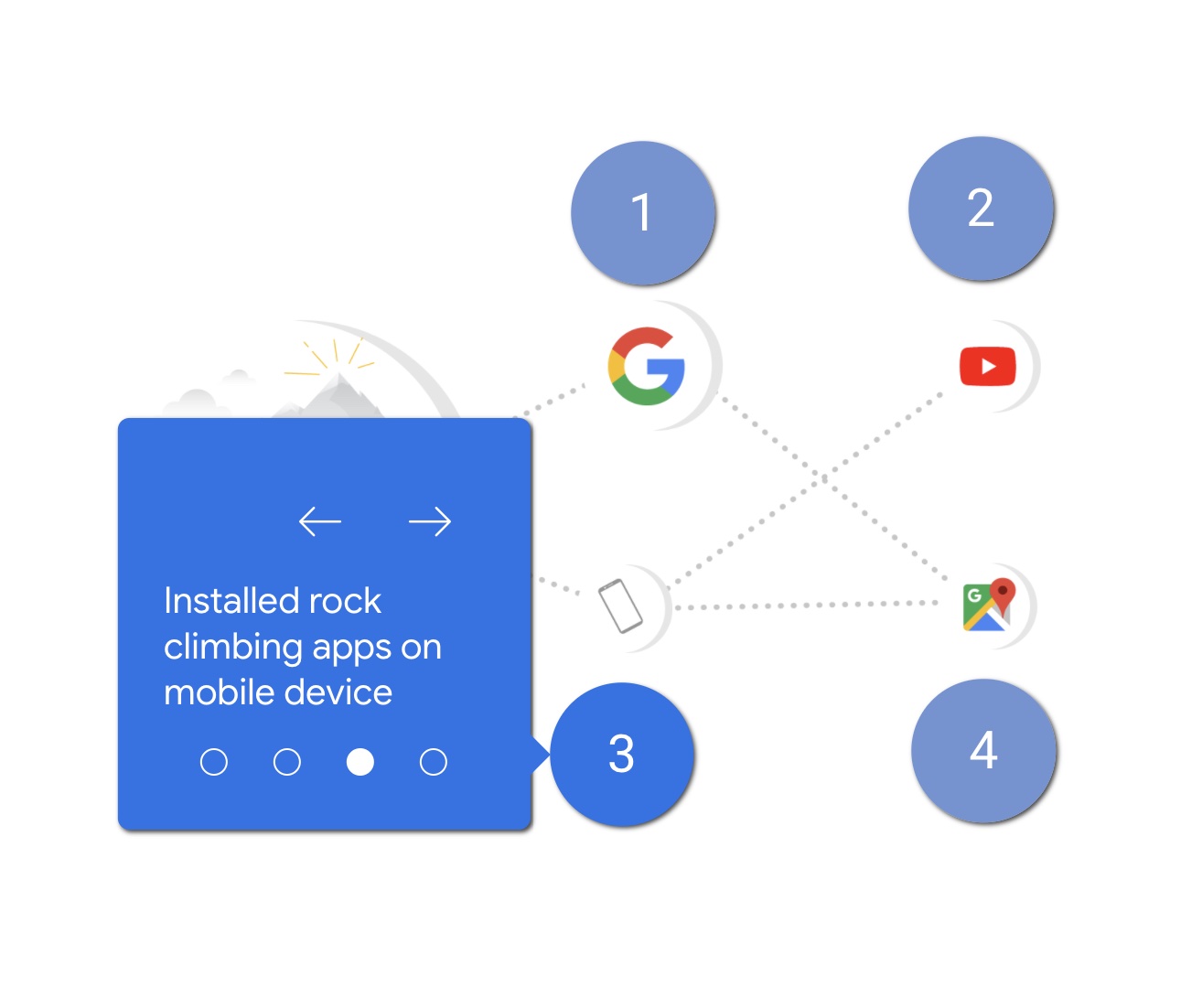 How Long Did the Google Ads Certification Coursework Take?

Within a couple days I had completed all the courses. I put into about 3 hours of my time, and Google estimates it should take two and a half. Before jumping into the actual exam I also did the optional 21 question pre-test. I will note that that his zero impact on your score, rather its main purpose is to give you an idea of of the questions you’ll encounter during the real thing. Happily, I scored 90%!

After all the coursework and some additional reviewing it was time for the real thing. The final quiz is 50 questions, and you’re allotted 75 minutes to complete it. To be successful and earn the certification you must achieve a mark of at least 80% (or 40/50). The good news is, if you don’t pass you can take the test again the following day. It’s also important to note that during the test you can’t go back and change an answer once you’ve moved on to a new question, so take your time! 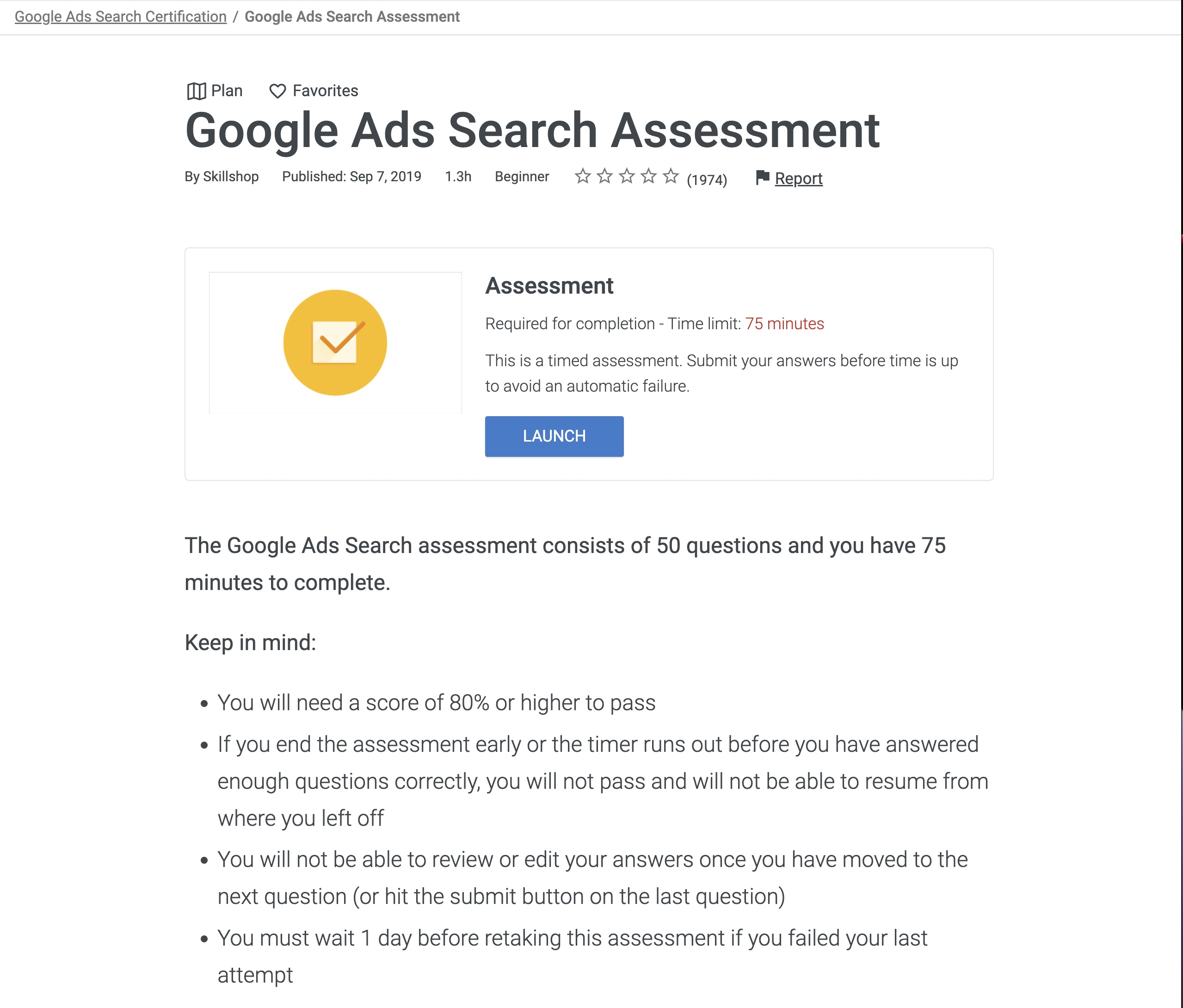 Before you begin the test Google throws up a quick advisory basically say that you promise to legitimately take the test, and that you won’t use anything to aid you. In other words, the Google Ads certification test is not an open book. This is a test of your own knowledge, and because of the digital nature of the test, it’s entirely based on the honour system.

Now, taking the actual test actually got my heart pumping quite a bit. Despite really scratching my head at a bunch of the questions, somehow I was able to pull off a pretty decent score and even had lots of time left over. Interestingly, during the test I was sure that I had used up my ten wrong answers, but much to my relief it turns out that I only missed two!

After completing the test I was not only relieved, but also happy to see that I had earned a fancy certificate from Google that comes with it’s own link where I can point people to. If you’d like to see what it looks like, you can check mine out here.

That’s basically it! If I had any final advice for someone planning to take the Google Search Ads certification, they would be:

After completing the Google Search Ads certification, I went on to do several others, including the Display Ads course, and also Shopping Feed and Video Ads. I’m glad I did for a number of reasons, but also because many feature a lot of the same content as the Search Ads module. As a result, it didn’t take all that long to complete.

Again, if you’re someone who has lots of experience working in Google Ads you’ll probably have a similar experience. If you don’t yet, you should expect this to be a lot more challenging.

Not being able to visualize the interface and understanding the steps to setting up a campaign. This simple fact will likely make it more difficult to spot the red herring questions/answers in the multiple choice exam at the end.

I’m Michael Micacchi, and for 20 years I’ve built digital marketing strategies that help companies meet and exceed their goals. Connect with me for a free consultation, and find out how I can help you.

More From My Blog

Client Profile Photographer Nick Perry Back in the spring, I had an opportunity to start working with professional

Client Profile Artist Amanda McSherry For the last couple of months, I've had the incredible opportunity to begin

Hello, I’m Michael Micacchi, and for twenty years I have been providing digital marketing services that help grow businesses into brands in the modern marketing world.